Q: Who is Steve Cioccolanti?

A: Cioccolanti is a FALSE prophet, a husband with 3 wives and 2 divorces. #Steve Cioccolanti divorce


Full Evidence of the following claims in this link. 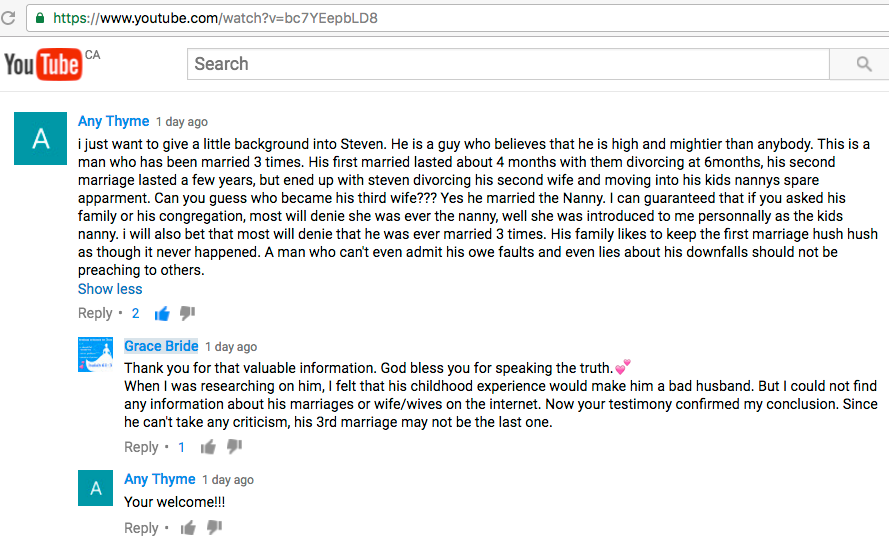 Jesus Christ loves His wife – the church, so much, that He died for her. Steve Cioccolanti dirvoced two women, one of the women he divorced is his kids' mother, to marry the nanny! Yet he still has the audacity to proclaim he is a Christian, a pastor, a Bible teacher, a prophet... Yes, he is a hypocrite and an antichrist!

Steve Cioccolanti - A Pastor to Avoid

Steve Cioccolanti - A Pastor to Avoid

Cioccolanti’s teachings on eschatology play fast and loose with conspiracy theories, numerology, and space aliens.  His speculations range from rational to bizarre, especially when he starts talking about the “cover-up” at Roswell.

Steve has written a book titled, “The Divine Code from 1 to 2020.”  While reading the reviews, it appears there are a lot of claims about the symbolism of numbers and why it is important that we know about such things.

From his church site, under “Core Beliefs,” there is this statement about women in ministry:   "Women are an integral part of the Body of Christ which is neither male nor female, with gifts differing according to the grace that is given to them."  So does this mean that Steve believes women should be in leadership positions such as elders and pastors?  With all his other problems, I think he might very well lean that way - but there was no clear teaching about it that I could find.

Like many others in the charismatic genre, according to his church’s “Core Beliefs,” they  teach "divine healing" - with members of the church being the healers.  I believe this gift was limited to the Apostles.  Additionally, he has DVDs teaching this stuff, and he also makes one's "words" important in healing - positive confession stuff, i.e, like the “Word of Faith” (he has a whole section headed, "speak words of life," under prayers for healing).

Again under his church’s “Core Beliefs,” there is a paragraph titled, “Total Provision,” which comes across as what I would call “Word of Faith lite.” Cioccolanti does not appear to be like the average WOF, “name it and claim it” teachers from what I could tell, in that he seems stay away from the extreme end.

In the “pray” section on his church’s site, Cioccolanti has many rote prayers, as well as including Scripture about the subject under discussion.  A lengthy prayer for his church ends with this statement: "We are a supernatural church, composed of supernatural people doing supernatural things, for we are laborers together with God."
This immediately sends up red flags - in what way does he see his church and people being “supernatural,” and what “supernatural” things to they do?  I couldn’t find any answers to those questions on the site.

In his "prayer" for the nation (he gives Australia as the example), Steve does the same thing so many U.S. Christians do - he claims the promise of 2 Chron. 7:14.  I wrote about that abuse of Scripture on my blog here.

Cioccolanti teaches the very aberrant “spiritual warfare” model of “binding” Satan, as well as a whole prayer which includes claiming “the blood” of Christ.

The prayer by members for the pastor is very, very presumptuous, telling God that His Spirit rests on Cioccolanti, etc.  And towards the end of the prayer they tell God that they will stand by their pastor and not criticize him, etc.  So if he teaches error, they pray that they won't confront him with it!

His "prophet's prayer" is claiming during the prayer that the person praying is indeed a prophet!  Shades of NAR and IHOP!

In his prayer for "studies and exams," Steve again claims to know what God wants; "If you’re a student, God wants to put you above the rest of the class."  This guy reminds me a whole lot about Beth Moore with all HER claims of direct revelation (although she doesn't claim to be a prophet.)  Then he says the two things you must do to pass exams are to (1) pray for an hour in "tongues" and (2) "confess the Scriptures" - yep, name it and claim it!

Cioccolanti is part of the whole "Rhema" charismania association, which, puts him right in shoulder to shoulder with the likes of Kenneth Hagan and the rest of the WOF crowd.


This is NOT a pastor who can be trusted with solid Biblical teachings.
Posted by Grace Bride at 4:19 PM 16 comments: